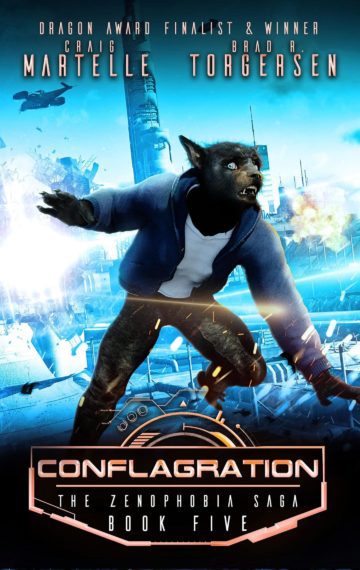 $4.99Buy NowRead A SampleSee The ReviewsSee The Full Series

The second book in a thrilling all-new Zenophobia trilogy!

Sankar’s voyage beyond the edge of the galaxy has awakened something old and monstrous. He and his team can’t fight it alone. Hell, even a single planet can’t fight it.

He has to unite the four races against a common enemy.

Maglor, the crime boss whose beneath-the-table ties to the four zeno nations may prove critical to convincing the leaders of Oterosan, Cornelior, Angelos, and especially Medvegrad, that united they stand, or divided they fall.

Junak and the crew of the Bilkinmore have a battle on their hands, as they attempt to recruit local allies from the fringe of Golongan space. Neither their nemesis Arbai nor her compatriots aboard the Direwolf will give up their stake on Golongal without a fight, and with only the aerospace fighter Scythe to assist, Junak’s taking on the biggest challenge of his young Oteran life.

But there’s more going on than either Sankar or Junak suspect, since Ausha—Sankar’s ally from his cadet years—has taken on a mission of her own. And is determined to trace the lineage of the android named Elyass Forty One all the way back to his makers. And a world only spoken of previously in myth. A world called Earth

The second in a dynamic new series by Craig Martelle (Dragon Award Finalist for Best Military SF 2018) and Brad R. Torgersen (Dragon winner for best SF Novel of the Year 2019). Island of Dr. Moreau meets Indiana Jones, as zenomorphs search for the truth of their combined origin.