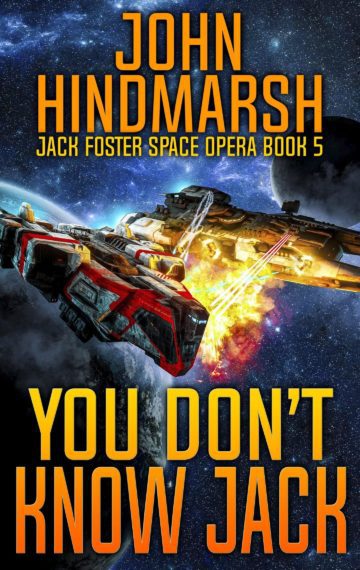 You Don’t Know Jack is book five in the Jack Foster Space Opera series – another rocketing read. Of course, it will be riveting.
Jack Foster is missing.

A distant planet roasts in the sun.

Not all its properties are known to the Omega Corporation.

One of the slaves – human – is about to recover his memory. So will his companions.

Time could be his weapon of choice to use to escape from the slavers.
Meanwhile, Jenny Layton, Jack’s partner, is waging a defensive war against trespassers on Jack’s Planet. Jenny’s also assisting smaller systems and planets defend themselves against a corporate monolith that seemingly has more money than sense.

In the meantime, Robert Van de Huis meets more opposition than perhaps he can handle.
Jenny prepares her presentation to the GalFed’s top legal assembly, a task which emphasizes Jack’s absence. All Jenny wants is his presence, or simply knowledge he is alive.

Jack finds timing is everything as he plans his escape from the slavers’ planet. Almost needless to say, he also is planning revenge on the slavers. His tasks successful, Jack turns his attention to rejoining Jenny.

Scars, deaths, and destruction follow both Jenny and Jack.

There’s a happy ending, though.

Another epic space opera story from an established and best-selling Amazon author.