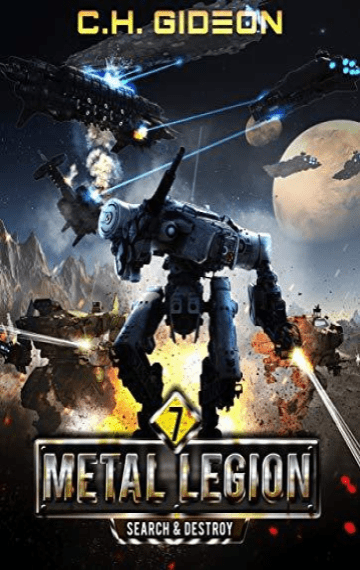 A mission unlike any other. Capture an invisible tank that’s faster and more potent than anything the Metal Legion has.

Taking the battle deep into Arh’Kel territory, Colonel Jenkins, Major Xi Bao, and the newly promoted Captain Podsednik are challenged both in space and on the ground. Can they gain superiority in orbit, at least while Legion mechs are landside? Can heavy metal win the ground?

Working together. Fighting separately. Losing means losing the war. Win the battle. Win the prize. Humanity is poised to take its place as the leader of all races.

Everything hinges on the Metalheads in their mechs.

Metal Legion – climb the ramp and come along for the ride. It’ll be bumpy and hot, but the sound of the mains firing is worth it. Read Metal Legion today.